In our clamorous culture, where media and entertainment complexes serve as leftist megaphones, conservatives may understandably feel glum.  In October’s Halloween vocabulary, we might even suspect it’s a house of horrors. The progressives in our midst praise long-discredited economic ideas, while their admirers demand a motley pile of illogical new social rules mined from the pits of depravity. Liberal activists seek to dismantle our Constitution bit-by-bit since it hampers their dark agenda. Screen-addled zombies of dreamy-eyed socialists follow at their heels, ignorant of history, bored with Patriotism and eager for free stuff. Many of us stare in sad disbelief at this freakish scene.

Republicans, however, are the patriotic optimists, not trembling turncoats. The towering elephant is our mascot, so a scaredy-cat apologist makes an ill-fitting costume. It dishonors our political heritage to shrink in the face of even the ghastliest political reality.  We expect weakness from the odd array of the perennially offended and ignorant mob that speaks for the left.  We should not expect to see it from a discerning citizenry that stands on the shoulders of patriots.

Conservativism in the Crosshairs

Many of us came of age in the Reagan years, when Communism was the enemy, America was unashamedly exceptional, and private enterprise was lauded. Optimism and principled thought formed the mentality that fueled the Reagan revolution; such a mindset also inspired the framers of our Constitution. One can only imagine what our determined and industrious forebears–who overcame overwhelming odds–might say to muster an army today. Have we considered where the next generation of optimistic, courageous, Constitution-loving Americans is going to come from? If this is a relay race, or a passing of the torch, where is the next leg’s runner?

As a parent of six children, I see their culture’s anemic regard for truth and logic. Teens spend free hours scanning social media accounts, texting and snap-chatting. Their celebrities– athletes and musicians with barrel-scraping character– act as opinion leaders. Simultaneously, the “Fourth Estate” of journalism is now nothing more than a freakshow of the latest outrage, real or imagined.  It’s hard to imagine that, saturated as our young future voters are with such nonsense, they will ever be candidates for rational political discussion.  One wonders–is conservatism a lost cause?

Fortunately, there are sparks of intelligent life to cheer us; these embers may also ignite some of the right’s best ammunition for halting those who would dismantle our grand legacy, from the Constitution itself to the institutions it protects. This topic requires a much longer treatment than what a blog post can afford, but I’ll start with a few thoughts about conservatism’s great advantages in the battle of ideas.

Savage Humor. Despite the left’s best efforts to censor comedy, young Americans haven’t abandoned their sense of humor.  They follow social media accounts that package satire and mockery in news-inspired memes, and they see the humorless contrast in the grim-faced gestapo on the left.  While younger Americans may be irreverent and ignorant of history, they still know a good joke when they see one.  Here the left faces a handicap: You can outlaw many forms of speech, but you can’t keep humans from snickering at your absurdities behind closed doors.

Winsome Rationality. Liberal messaging is ridiculously moralizing, bizarre and gloomy, so conservatives in education have a great opportunity to present winsome and encouraging truth.  The young recognize when a new moral or political code fails the tests of natural law, logic, or common sense. Therefore, while progressive teachers infuse the curriculum with the latest leftist thought, many students are unimpressed and uninspired. Unfortunately, they may lack enough information to argue a counterpoint intelligently.  A conservative teacher or parent can bring balance and clarity to biased curricula by discussing happy and and logical alternatives, such as the unique protections of our Constitution and the unrivaled opportunities presented by our capitalistic system.

Everyday Economics. Money is an unbiased instructor. Since even a strident democrat (secretly) enjoys a quick Chik-fil-A meal and buys school supplies at Target, it’s easy to use everyday transactions to explain capitalism’s value to a broad range of people. It’s undeniable that the array of quality goods typical of capitalist societies are not seen under the dark cloak of socialism.  Economics –Austrian, not Keynesian, and modeled at home, at school or in the workplace, is an able guide to the clear path of upward mobility, free of government obstacles.

Now that we have spotted some opportunities, how can we influence others in our spheres of influence? In the future, we can examine specific ways to pass the conservative baton, but for now let’s search our own backyards for ways to champion the conservative ideas that, indeed, made this country great. 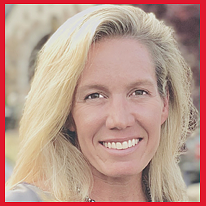 Ashley Baxter lives in Buckhead with her husband, six children and yellow lab. A Florida native, she received her political education in high school by reading her dad’s collection of National Review magazines. Ashley graduated from Auburn University and worked as a technical writer in her ancient past. When not driving somewhere, you can find her exercising, folding lots of laundry, or reading books outside.

ARTWORK SOURCE:
Blog article artwork has been retrieved and adapted from Muricans_Only, © 2019 on October 25, 2019.